UPDATE 6:30PM: In a stunning upset, “Election Truther” U.S. Senate candidate Ron Hanks holds all his assembly rivals below the 30% threshold. Say goodbye to Deborah Flora, Gino Campana, Eli Bremer and everybody else except Joe O’Dea who qualified for the ballot via petition:

We told you Ron Hanks is the center of gravity in the Republican Senate race.

We were more right than even we could have known.

Due to numerous delegates reporting fraudulent behavior during the vote today I will not be conceding until I have had ample time to investigate their claims.

Their concerns deserve to be addressed. Our movement is NOT stopping! 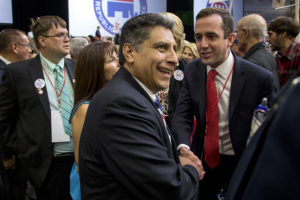 First results are in at the Republican Party state assembly at the World Arena in Colorado Springs, where perennial candidate for governor Greg Lopez just narrowly bested CU Regent Heidi Ganahl to win top line on the June 28th primary ballot–and in the process narrowly shutting out upstart Danielle Neuschwanger, who came in just under the 30% required to stay in the game:

Lopez reportedly inspired delegates ahead of the vote with a speech promising to pardon indicted Mesa County Clerk/Secretary of State candidate Tina Peters if elected. Watch this space for updates, many more races (including Peters’) coming up.