During the Buena Vista Board of Trustees first regular meeting of the year on Tuesday, January 11, 2022, attendees  witnessed the swearing-in of Officers Chris Greene and Lance McDonald, who recently graduated from Pikes Peak Regional Law Enforcement Academy and got an update on first responders’ mental health.

Cadet graduation took place on December 23, 2021, for Officers Chris Greene and Lance McDonald. Both officers are now in a 14-week training program. The department is also fully staffed for the first time in more than two years. 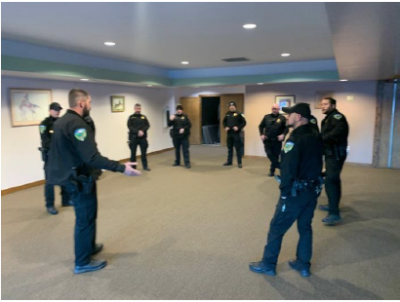 BVPD officers meet on one of their overlapped days. Being fully staffed allows them to meet for additional training sessions. Courtesy of the BVPD.

“One of the ways this helps is that we’re able to get together on our overlap days to conduct additional and much-needed training,” said Police Chief Dean Morgan.

“There’s a foundation of trust between the citizens of Buena Vista and the Buena Vista Police Department (BVPD),” said Morgan. “As a new officer, you must be a keeper of this trust. This trust is part of the legacy built by former BVPD officers and leaders, as well as current members of the BVPD.”

Morgan reported that he and School Resource Officer Megan Mitchell attended the school board on Monday, and expressed their appreciation for the work of Superintendent Yates and the board to work with the department.

Case reports from 2020 to 2021 were a bit lower, though citations nearly doubled, from 336 (2020) to 723 (2021). Driving Under the Influence (DUI)s were also up last year, and there were five between Christmas and New Year’s.  Morgan reported that Shop with a Cop with local students went very well, with more than $200 available for each student to put toward gifts for their families.

He introduced Investigator Amber Lee and Solvista’s Chief Operations Office Mandy Kaisner to discuss the way the department is working with Solvista to support officers’ and first responders’ mental health.

“As you look at the statistics for 2021, you see a lot of categories, like burglary and assaults,” he said. “There’s often a unique story behind what those numbers are…What officers encounter on those calls can be pretty traumatic, and that stress can be compounded over the years.”

He and Investigator Amber Lee, said that based on their own experiences with a few calls over the years, they decided to prioritize officers’ mental health.

“I know firsthand, not only from doing what I do for a living but also being a daughter of people who have done this, how much this can really affect families,” said Investigator Lee.

Between 2004 and 2020, around 345 First Responders in Colorado died by suicide, 43 percent of which were veterans. Investigator Lee also reported that 90 percent of departments in the state have less than $8,500 in their budget for mental wellness training. Cost of treatment, transportation to clinics, difficulty getting time off work, lack of effective PTSD treatments, fear of repercussions, and stigma associated with seeking help all factor into barriers that first responders might encounter in getting help.

“A lot of those [PTSD services] do happen on the Front Range, so we’re trying to get more here,” she said. “It used to be ‘you’re fine, you chose to do this.’…Well, they’re not fine, and that’s where the stigma is going to come in.”

She listed some resources on the Front Range, including Code 4 Counseling in Lone Tree and Status Code 4 Counseling in Colorado Springs, as well as the National Suicide Prevention Lifeline, and  introduced Mandy Kaisner of Solvista, who thanked the department and Investigator Lee for starting the conversation.

“This is such an important conversation and one we’ve needed to have for some time,” said Kaisner, adding that she started out doing crisis work and wanted to build more into community mental health programming. “We have come quite a long way, and I’m so thankful for the support and patience to have us help our community build these programs that we’ve needed for some time.”

Kaisner said that they recently launched a co-response program that pairs a Master’s-level clinician with law enforcement to respond on scene to deescalate situations and get officers back on the street.

“We need to continue to adjust and enhance and figure out how we best dispatch [co-responders],” she said, “but I think the communication lines are open and we’re doing a lot more work….so that’s exciting.

“Sometimes we have a trained peer, who is a person with lived experience, that is also able to come out on-scene, which is quite useful for people experiencing a crisis to talk to someone who has also experienced a crisis and get help and support.”

Kaisner said she was struck by a conversation she had last year with Chaffee County Coroner Jeff Graf. There were 17 deaths due to suicide in 2020 in Chaffee County and 19 deaths in the county due to COVID. Kaisner’s team applied for federal funding through Project Hope, which is an adult program that allows them to provide intensive treatment to people who identify suicidal thoughts. They can see the individual up to three times a week and offers weekly intensive treatment for up to six weeks.

“The people that we’ve already engaged with this program, we’ve seen a lot of success,” she said. While it is still an adult-only program, they have been able to have conversations with the state to try to launch a similar program for youth.

Solvista also has a Community Steering Committee and is preparing to open its Regional Assessment Center at the Heart of the Rockies Regional Medical Center campus. They’re currently on schedule for early completion, with a grand opening planned for mid-May. It will be a seven-bed acute withdrawal management facility and an acute treatment facility. Kaisner said they’ve been talking with law enforcement for almost 14 years about the time and resources it takes to transport people to the Front Range for treatment and bring them home. 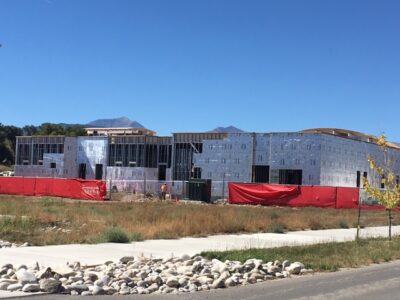 Kaisner concluded by saying they’d be asking for a letter of support for a grant to fund co-response training to support law enforcement and  help co-responders do their work. “We want to not have our law enforcement doing mental health treatment on the street. We want to make sure that individual, if possible, is paired with a trained mental health professional and a trained officer who is able to deescalate and hopefully try to divert any law enforcement involvement in the future.”

Trustee Libby Fay asked about the beds for the Regional Assessment Center and whether they were for Salida only or if they’d be available to others. Kaisner clarified that the assessment center is to become a regional hub for Lake, Park, Chaffee, Custer, and Fremont counties. Fay also asked the board if there was anything in the budget for first responders’ mental health and whether there was anything available for them at present.

“I’m wondering if, in the future, we could have some amount budgeted,” she said. Chief Morgan said that there was a cushion for unforeseen needs in the department’s budget to support things like Code 4 Counseling, but that they’d be eyeing it more specifically going forward.

“We do find ways to cover that, we do prioritize that,” said Town Administrator Phillip Puckett. “I think it’s something we might want to call out in the future and track separately to make sure there are enough funds for that.”

Treasurer Michelle Stoke added that their health insurance has an Employee Assistance Program and that it has been used in the past to cover some of those mental health needs. “I believe it’s been booked to Miscellaneous or Other Benefits.”

Mayor Duff Lacy said that these sorts of services should be available to officers 24/7, and Investigator Lee added that they’ve had lots of support within the department to cover shifts, help babysit, and take care of each other to make sure first responders can get to those resources.

“We’ve lost staff,” Lacy said. “That impacts the whole town. We take it for granted, that you’re tough guys…It builds up, big time.”