The Harman Town Hall was built in 1891. The town was later annexed by Denver. Photos courtesy of LIV Sotheby’s International Realty/ Kris Lewis.

As one of Colorado’s largest homebuilders, Pat Hamill knows the tricks and tools to make a house a home.

The CEO of Oakwood Homes renovated his own residence at 400 Saint Paul St. in Cherry Creek, adding a three-car garage with subterranean storage space that can fit 10 cars, an event space and a finished basement with two climate-controlled wine cellars, a theater and a hidden speakeasy.

The four-bedroom, four-bathroom home was originally built in 1891 as the Harman Town Hall. Edwin Harman and his wife Louisa incorporated their 320-acre farm into the small town of Harman in 1886.  After Denver annexed Harman in 1895, the building continued to house government offices for a time. 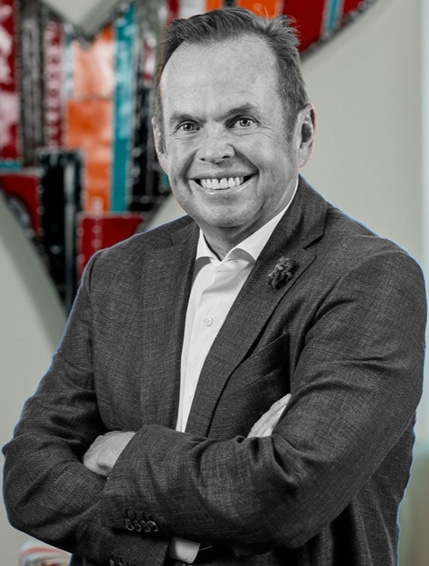 Hamill purchased the residence and the lot next door for $1.65 million in 2009, according to property records.

“It was an iconic home, or at least I thought it had the potential to be, and I’m an avid lover of history, so this home was quite special to me,” Hamill said.

If sold at asking price, this would be the highest priced home sale in Cherry Creek. ​​That title is held by a penthouse condo at 100 Detroit St. that sold for $9 million in March.

Hamill completed a multi-million dollar renovation of the home in 2010, restoring the residence’s facade to its original state and gutting the interior to create a contemporary theme mixed in with the historical elements. He added around 7,000 square feet, including a new living area, the attached garage and a private event space. He also dug out the basement to create a 6,500-square-foot space.

“We even went back and found reclaimed oak and added floor design patterns that would have been utilized during the original time period,” Hamill said.

Hamill used the private event space to host charity dinners, retreats and fundraisers for organizations like Boys and Girls Club and First Tee. He also held an annual Halloween party in the hidden speakeasy.

“I hope the buyer is someone that shares my love and passion for giving back to the community,” he said.

The Oakwood Homes CEO has a love of cars and stored vintage vehicles, like a 1913 Ford Model T that belonged to his father, a 1948 Kurtis Sport Car and a Fiat Jolly, which he calls his “Cherry Creek touring car.”

His favorite spots in the home are his library and the outdoor spaces, including two courtyards and a rooftop deck.

“There really is no comp to this home in all of Colorado,” Hamill said.

Hamill, 63, moved to Denver from Michigan in 1978. He founded Oakwood Homes in 1991 and sold the business to Clayton Properties Group for an undisclosed amount in 2017. He is still chairman and CEO of the business, which had 2021 revenue of $650 million, according to previous coverage.