Pop Rock And Doo Wopp LIVE! At The Strand 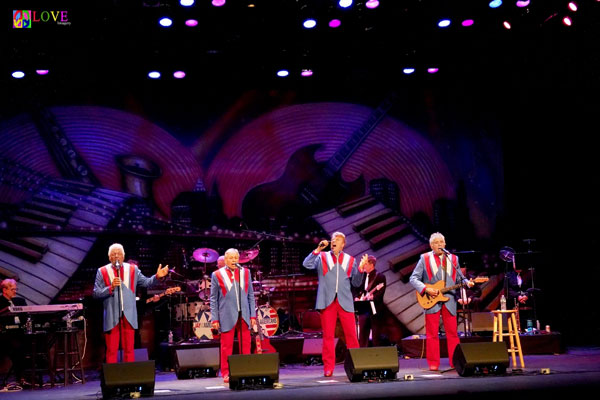 The stage is set and music lovers are getting ready this Friday, March 18, 2022 evening for a nostalgic Pop, Rock and Doo Wopp show at the Strand Theater in Lakewood, NJ. On the bill for tonight’s event are The Mystics, The Fireflies, LaLa Brooks, Larry Chance and the Earls, Emil Stucchio and the Classics, and Jay and the Americans.

Before the show begins, we chat with Pop Rock and Doo Wopp’s producer, Joe Mirrione, who tells us, “It’s always exciting to do a show like this. These shows are like the performances I went to as a kid — the ones with a lot of vocal groups.” Explaining, “Tonight will be a cavalcade of groups with lots of harmonies and hit records,” Mirrione concludes, “It’s been a while since we’ve done a Pop, Rock and Doo Wopp show, and it’s great to see all the fans here again tonight.”

Inside the historic Strand Theater, the lights dim and emcee Emil Stucchio welcomes the audience to the show exclaiming, “I missed you guys so much! For just a few hours we’re going to be teenagers again,” before telling jokes and reminiscing to the Jersey crowd about his years growing up in Brooklyn. 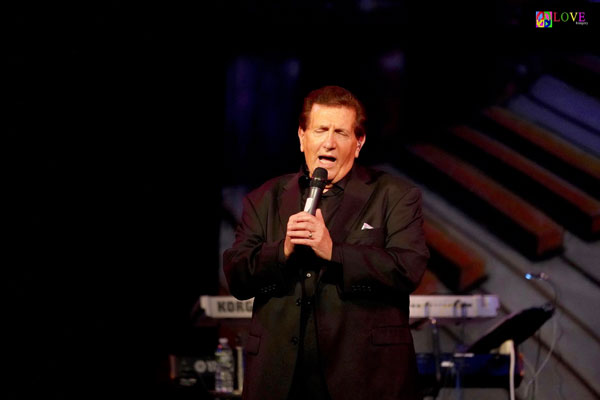 Stucchio introduces the evening’s first act as being “friends for over 63 years.” Looking dapper in their white tuxedos, The Mystics — Rocky Marsicano, Ralph Varrone, Phil Cracolici, and George Galfo— open with a cover version of Jackie Wilson’s “(Your Love Keeps Lifting Me) Higher and Higher.” The group’s choreographed stepping and hand motions have audience members tapping in rhythm to the music. 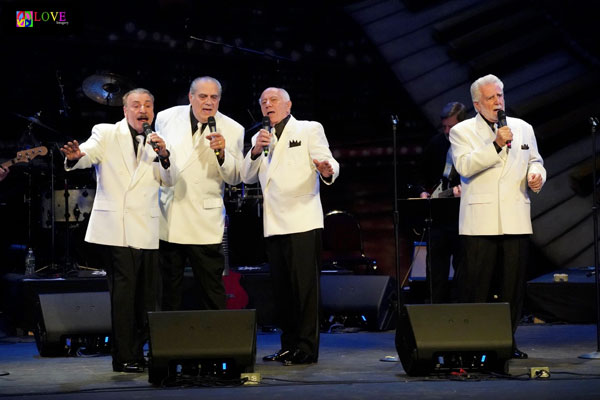 Following their rendition of “Don’t Take the Stars,” where audience members tap their toes to the group’s nostalgic happy sounds, The Mystics perform an upbeat version of Frankie Lymon’s “Goody Goody” and the crowd happily sings and claps along.

Advertise with New Jersey Stage for $50-$100 per month, click here for info

The singers launch into their arrangement of “Somewhere Over the Rainbow” before welcoming original Mystic Al Contrera to sing the low lead on a snappy version of their 1960 hit, “White Cliffs of Dover.” 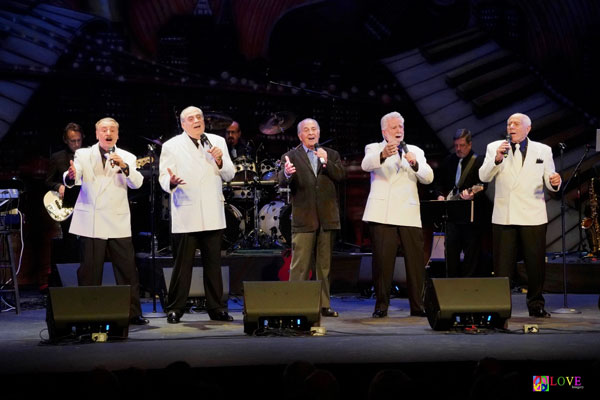 Ending with The Mystics’ biggest smash, “Hushabye,” the vocalists perform in glorious five-part harmony complete with a soaring high descant which has the audience cheering and applauding.

Stucchio returns to the stage to announce, “We’re going to stay in Brooklyn on the romantic side,” as he introduces tonight’s next group, The Fireflies.

A sax solo growls and wails to the beat as The Fireflies — Marco Gueli, Tony Errigo, Vic Puma, and Nick Catello — doo-wop together on their version of The Velvets’ “Tonight (Could Be the Night).” 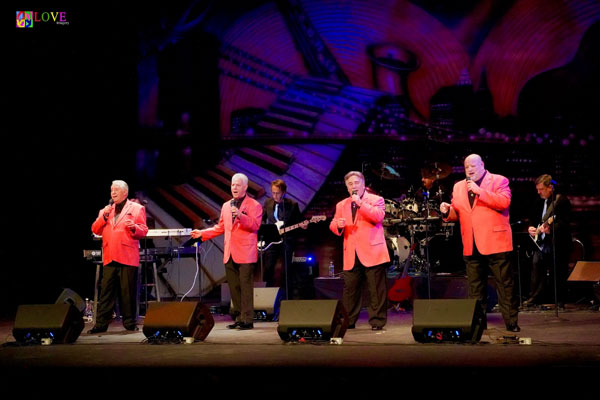 They follow up with four-part vocal harmonies on their own 1960 ballad, “I Can’t Say Goodbye.” Following enthusiastic applause, the group performs a lively version of The Diamonds’ “Little Darling,” complete with staccato intro, spoken middle section, and “cha-cha-cha” ending.

Featuring lead singer Marco Gueli, The Fireflies continue their set with their ballad, “Since You Are Gone,” before concluding with “the 1959 song that put us on the charts and on the map,” “You Were Mine.” 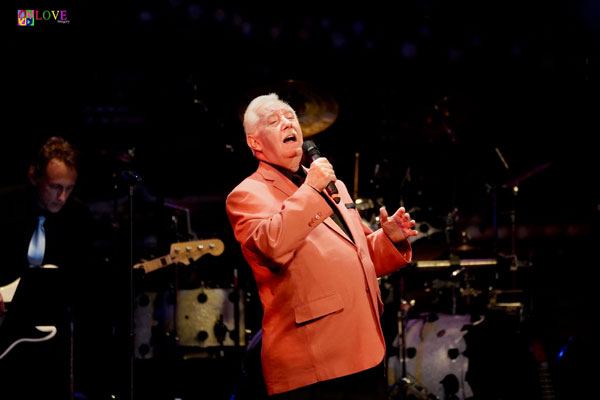 Stucchio returns to introduce LaLa Brooks, the former lead singer of The Crystals. Sounding youthful and powerful, Brooks wows the crowd with her sparkling rendition of the Crystal’s 1963 hit, “And Then He Kissed Me.” 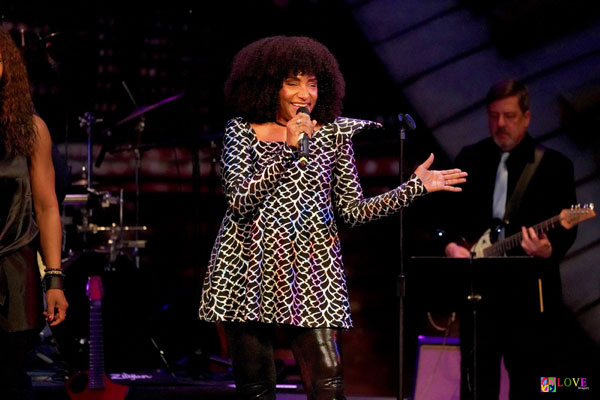 Following a rockin’ rendition of “Little Boy,” Brooks announces, “This was the first song by The Crystals,” as she handles the lead on a tender version of “There’s No Other (Like My Baby).” 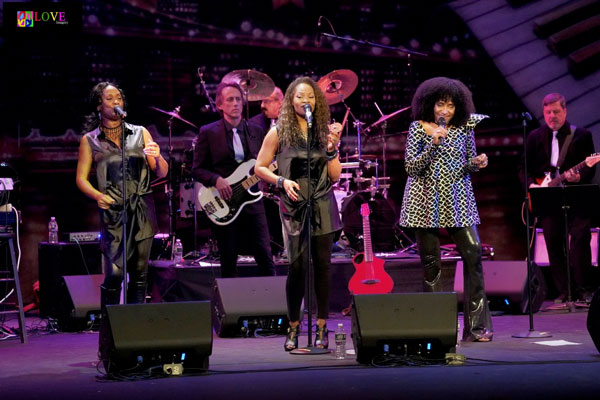 As a tribute to the late Ronnie Spector, Brooks performs her version of The Ronettes’ “Be My Baby,” which has the audience cheering for more. At the end, LaLa confesses,“That was very difficult for me but I got through it.”

Continuing, “I did this song when I was 15. Get up and party with me,” Brooks concludes her set with her 1963 Crystals’ smash, “Da Doo Ron Ron.” On this number, Brooks gets the crowd up singing, dancing, and clapping as she dances down into the audience and then back onstage. When she takes leave of the crowd, audience members cheer for Brooks while a fan shouts out, “Bring her back!” 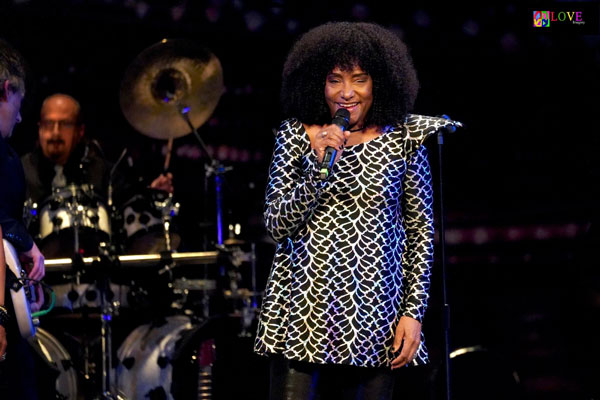 Act I concludes with Stucchio introducing Larry Chance and the Earls. The group opens with their 1963 hit, “Never (Fall in Love Again),” bringing good vibrations to the crowd and transporting them back to a simpler time. 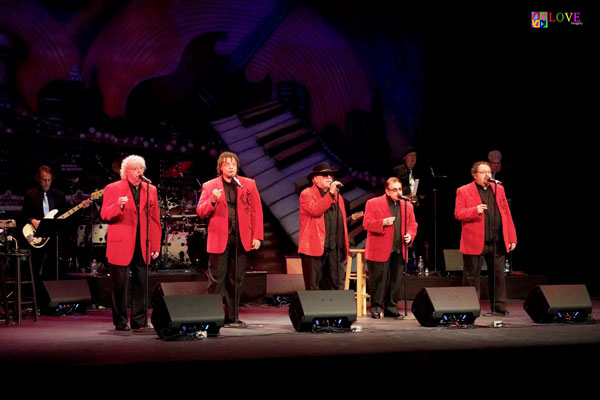 Advertise with New Jersey Stage for $50-$100 per month, click here for info

Moving on to a song from 2005, Chance and the group perform a buoyant rendition of their catchy “A Capella with My Friends” as the audience claps along. They follow up with a “I (Who Have Nothing),” a 1963 Ben E. King hit made even more popular later when covered by Tom Jones.

Faces in the crowd light up as the Earls perform their huge 1962 smash, “Remember Then,” the song’s ubiquitous lyrics, “”Re-meh-meh, re-meh-meh-mem-ber,” eliciting smiles as audience members tap their toes and joyfully sing along. 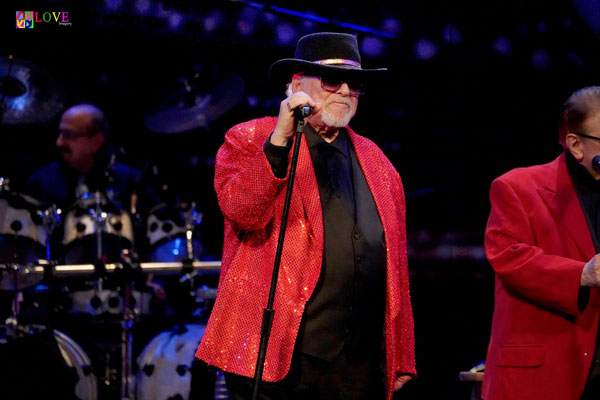 Chance and Co. conclude their portion of the program with a unique and emotional rendition of Frankie Laine’s 1953 classic, “I Believe.” Singing directly from his heart, Earle is rewarded with a rousing standing ovation.

Following intermission, Stucchio returns to the stage with his group, The Classics — Teresa McLean and Al Contrera — along with singer Rebecca Hogan. The Classics make their entrance by marching through the audience while singing and dancing to an upbeat medley of pop tunes including The Doobie Brothers’ “Listen to the Music,” Frankie Valli and the Four Seasons’ “Let’s Hang On,” Tina Turner’s “River Deep, Mountain High,” The Temptations’ “I Can’t Get Next to You,” and Tommy James and the Shondells’ “Mony Mony.” 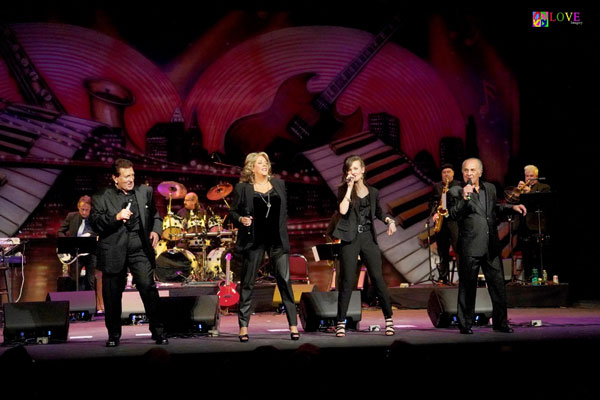 At the energetic conclusion, as the crowd whistles and cheers, singer Al Contrera catches his breath and jokes, “Does anyone have a phone? Can you dial 911?” 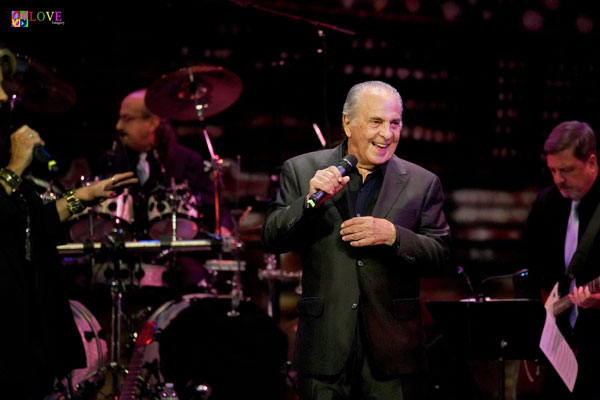 After announcing, “It’s romance time,” Stucchio performs his rendition of “Then You Can Tell Me Goodbye.” Next, Teresa McLean is featured on The Angel’s “Til.” Her powerful voice soars above the band on this emotional ballad which brings cheers from the audience. 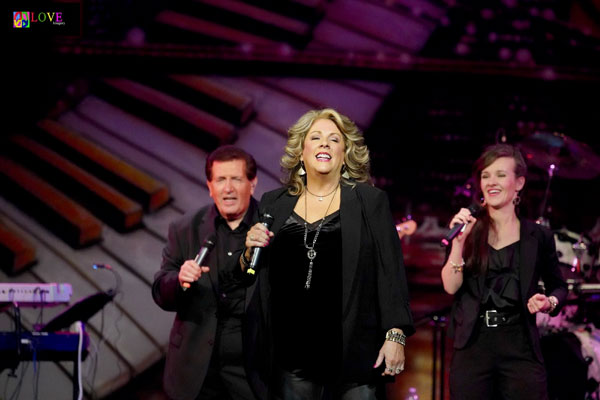 Moving to the music, Stucchio and Co. conclude their portion of the program with beautiful harmonies on the group’s 1963 million-seller “Till Then.”

Following enthusiastic applause, Stucchio welcomes producer Joe Mirrione to the stage and he and the crowd sing a heartfelt “Happy Birthday” to Stucchio who turns “78 years young” on April 9. Mirrione follows up by introducing tonight’s final performers, Jay and the Americans.

Opening with their 1963 hit, “Only in America,” the rich vocal harmonies of Jay and the Americans — Sandy Deane, Howie Kane, Jay Reineke, and Marty Sanders — fill the Strand auditorium on this bright, upbeat song that has the audience singing along. 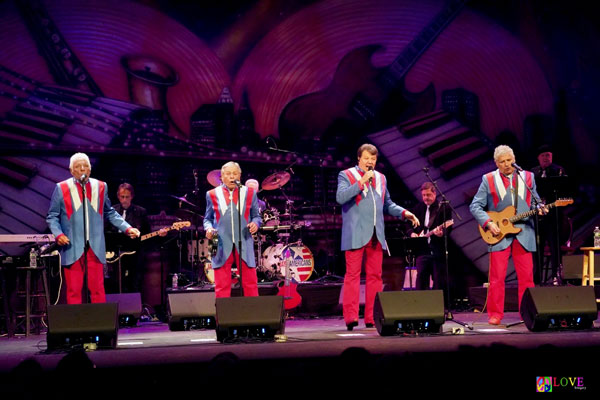 Their voices ringing clear and strong, the group segues into their 1964 hit, “Let’s Lock the Door (and Throw Away the Key)” before shifting into an uptempo rendition of their 1965 Top 20 recording, “Some Enchanted Evening,” from the Broadway musical, South Pacific.

Lead singer Jay Reineke explains to the crowd that he and the group were supposed to play here at the Strand before the pandemic hit, joking, “I’ve been waiting in the parking lot for two years!”

Founding member Sandy Deanne pays tribute to the group’s original lead singer, Jay Traynor, when he and the rest of the group perform Jay and the Americans’ first major hit, the 1961 Top 5 single, “She Cried.”

Reineke introduces two more original group members, Howie Kane, who sings “Turn Me Loose,” and singer/songwriter/guitarist Marty Sanders, before the quartet performs an uptempo rendition of The Drifters’ 1960 hit, “Save the Last Dance For Me” which has the crowd joining in and singing along. 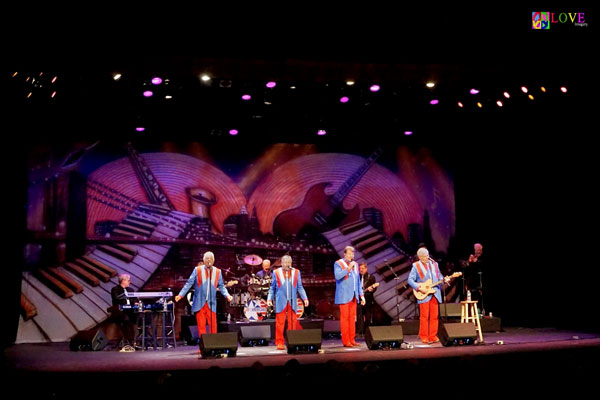 The vocalists then launch into a pair of Roy Orbison songs — first, “Crying” and then, “Pretty Woman” — where Jay Reincke sings to all the pretty women in the audience as he growls and purrs the song along.

Following avid applause, Jay and the Americans perform a sweet and sentimental version of The Everly Brothers’ “Let It Be Me,” before segueing into a stunning rendition of “Cara Mia.” On this show-stopping number, Jay Reincke hits all the high notes with ease, bringing the crowd to its feet.

Sandy Deanne acknowledges that Jay and the Americans had a close relationship with The Ronettes before performing a hit for both groups, “Walkin’ in the Rain,” the trumpeting horns adding to the group’s rich, full sound.

Next, the singers perform their 1964 Top 5 classic, “Come a Little Bit Closer.” The audience joins in on the “Come a little bit closer/You’re my kind of man/So big and so strong” refrain of this fun, upbeat song which some recognize from the 2017 film, Guardians of the Galaxy Vol. 2.

Following hearty applause, Jay and the Americans take a moment to acknowledge all of the veterans, first responders, and police officers in the audience and around the country who give of themselves every day. Here, the group concludes its set with their 1968 Top 10 smash, “This Magic Moment,” the audience cheering as the group repays them with one final Jay Riencke chorus of “Cara Mia.” 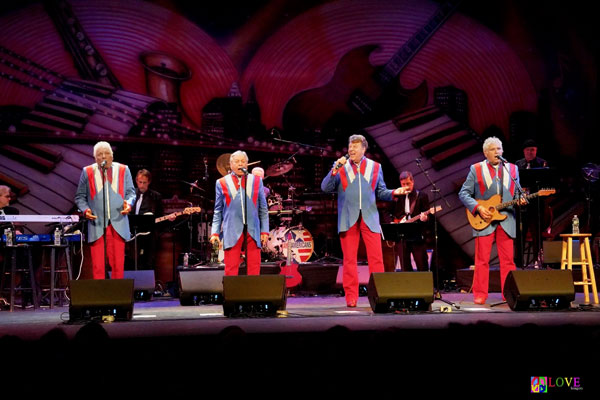 As the crowd stands and applauds, Stucchio announces, “Good night everyone! On behalf of all the bands, thank you for coming. Let this be the first of many more times we get together again!”

To learn more about upcoming concerts at The Strand — including Stars of the Sixties featuring Hermans Hermits starring Peter Noone and Gary Puckett & the Union Gap on October 7, 2022 — please go to strand.org. For information future Pop, Rock and Doo Wopp concerts, please go to poprockdoowopp.com.

Spotlight Central. Your source for Jersey entertainment news and reviews