There was a time, not so long ago, when it was tough to even name ten barbecue joints in Denver. But over the past five years, the slow-smoked scene in this town has grown, and now anyone craving a bout of the meat sweats can find great brisket, pulled pork and burnt ends, as well as a smattering of stellar sides.

Sadly, we’ve lost two favorites — one for good, when Owlbear closed early this year. Wayne’s Smoke Shack was heavily damaged in the Marshall fire that broke out on December 30. The kitchen at that Superior spot recently installed a new stove with a flat top that it plans to use for specials like brisket breakfast tacos when it reopens, but in the meantime, Wayne’s is off the list.

While our picks for the best barbecue joints stick to brick-and-mortars that are open, Denver also has a strong barbecue food truck scene, with standouts like Barbosa’s Barbecue and Saucy’s Southern, which will soon open a permanent location near the University of Denver.

While we wait for that, there are plenty of other pitmasters serving up tasty plates of ’cue, from newcomers who are making names for themselves to spots we’ve been frequenting for years. Here are the ten best places for barbecue in metro Denver, in alphabetical order: Don’t skip the sides at AJ’s.

Chef Jared Leonard made a name for himself in Chicago with hot chicken sandwiches and Texas-style barbecue before taking aim at Denver, opening concepts that include Chicago thin-crust pizza spot Grabowski’s at the Source and Campfire in Evergreen. Located in an industrial neighborhood across from the railroad tracks, AJ’s serves Texas-style pit-smoked meats, including brisket, pastrami, burnt ends, pork ribs and more, paired with such sides as custard-filled cornbread and smoky pork green chile. Take your loaded tray to one of the long tables in the dining room, where you’ll find a variety of sauces. AJ’s also has plenty of cold beer and a full bar. 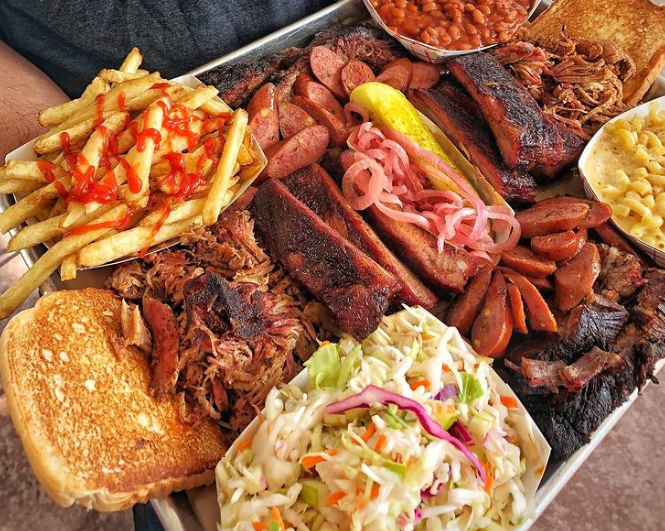 A loaded tray from GQue.

GQue owner Jason Ganahl (yes, he’s the husband of gubernatorial candidate Heidi) competed on the competitive barbecue circuit for years, earning the Rocky Mountain BBQ Association’s Team of the Year award and placing high in several of the top national competitions sanctioned by the Kansas City Barbecue Society. Even now, with four GQue locations, his meats are among the most consistent across the board, no matter which part of town you’re ordering in. While the smoked wings are incredible, a sampler is the best place to start; everything from the ribs to the brisket, sausage and turkey are done right. Add on some smoky pit beans, tangy slaw with a sweet hint of apple, and housemade kettle chips for a real feast. 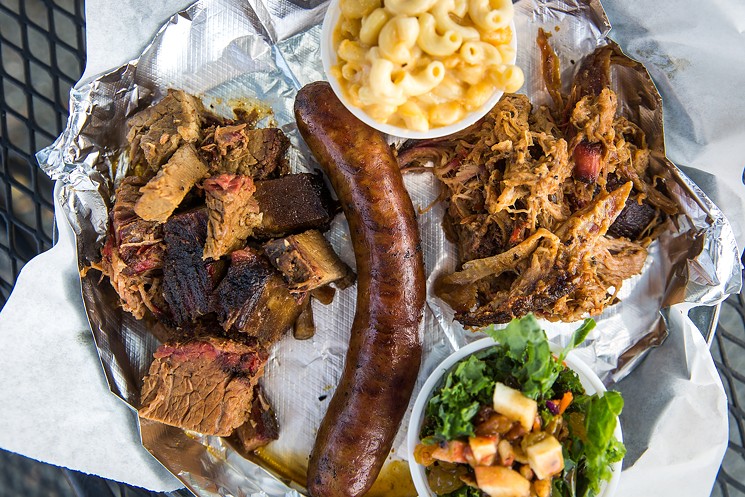 The Skinny Pig Sampler at Piggin’ Out Smokehouse.

“This way to heaven,” reads a sign covered in flying pigs outside the country-style shack that houses Piggin’ Out Smokehouse in almost-rural Lakewood. Along with straight-up smoked meats (the best bets are the pulled pork, pork ribs, chopped brisket, sausage and hot links), the huge menu includes salads, sides (four types of mac and cheese!), bowls and loaded sandwiches like the Backyard Tango, with pulled chicken, pork, or sliced turkey and blue cheese, candied bacon, seasonal fruit and chipotle raspberry glaze. When Owlbear closed in January, it left a brisket-sized hole in the hearts of Denver barbecue lovers, but two former employees along with another friend came together to carry on its live-fire cooking legacy in the same Larimer Street location. At Pit Fiend, which is open Friday through Sunday, the menu includes Owlbear’s brisket and mac and cheese, which are as delicious as ever. Michael Graunke, Juan Pablo Llano and Esteban Gallardo have made the place their own, though, adding globally inspired items such as mojo pulled pork, Yucatán-style pulled jackfruit and Colombian-style pinto beans (a recipe from Gallardo’s mom). Also new: a slew of sauces and even more Dungeons & Dragons references. Plates by the Pound draws a line every Saturday.

Plates by the Pound

During the pandemic, Aaron Gonerway started selling plates of barbecue out of his home, an endeavor that
was encouraged by his wife, Sherrita. He quickly gained a following, and in 2021, he received a $7,500 grant through Kingsford Charcoal’s inaugural Preserve the Pit program; he used the money to open a takeout-only brick-and-mortar location that’s only open on Saturdays. Every week, a line forms outside the small space as fans of Gonerway’s ribs, brisket and rotating sides wait for a fix. There’s no seating on site, so plan to take your smoked-meat haul home — or to a nearby park for a picnic (don’t forget extra napkins).

In 2019, Fort Worth native Nick Prince opened Post Oak Barbecue after years of mastering his smoking skills at backyard cookouts and barbecue contests. This joint uses only post oak delivered from Austin and 100 percent wood-fire cooking to nail the flavor of Texas-style ’cue. The prime Angus brisket is a must, but you can also load your choice of smoked meat onto tacos, baked potatoes or jalapeño bacon mac and cheese. Finish up with gooey butter cake for the kind of meal that necessitates a nap. 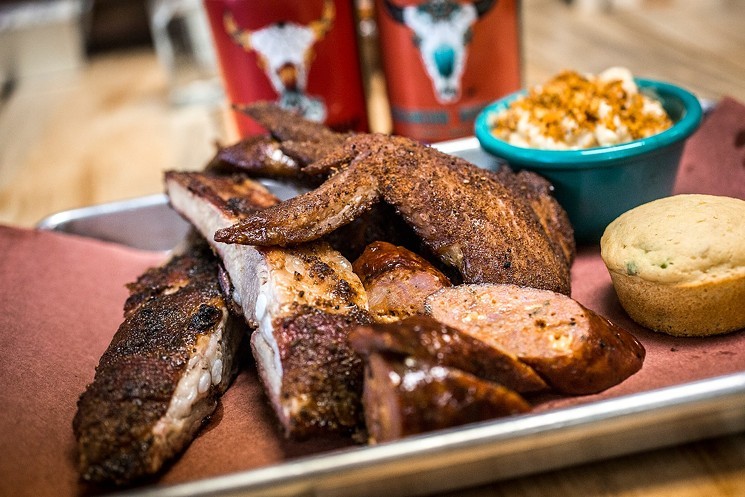 While many local barbecue joints specialize in Texas-style ’cue, when it opened in 2015, Roaming Buffalo quickly became a standout as one that roots itself firmly in Colorado culinary history, with pulled lamb, huge bison ribs and venison sausage. It also serves more traditional meats such as pork ribs and brisket, which are available by the pound, heaped onto sandwiches or on plates, with sides like smoked poblano cheddar mac and Southwest potato salad. Get the goods from 11 a.m. until they sell out. Both the original and a second location in Golden are home to one of the best barbecue deals around: $3 sammies made with a mix of leftover meats smothered in barbecue sauce on a hamburger bun, available Saturday and Sunday at the Downing Street location and Wednesday through Sunday in Golden. 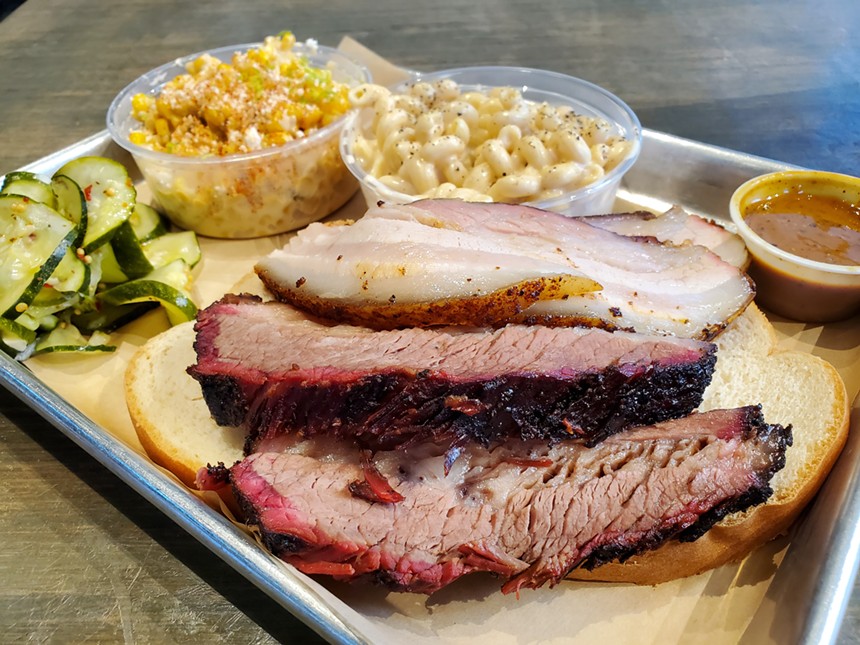 Brisket and pork belly from Smok.

Drawing from his childhood memories growing up in Kansas City and Austin, and adding his experience as a professional chef at high-end restaurants, Smok owner Bill Espiricueta turns out deeply smoked brisket, rich pork belly and spare ribs good enough to suck the bones dry, along with a wide array of other smoky options such as brisket red chili and smoked jalapeño poppers. The sides here are some of the best in town, especially the elote-inspired creamed corn and rich mac and cheese made with spiral noodles. And yes, you definitely want to add on the housemade pickles. Smokin Yard’s BBQ was founded in Idaho Springs, and its Denver outpost opened in 2017.

At Smokin Yard’s BBQ, the Yard family (which also runs the original Smokin Yard’s in Idaho Springs) cranks up the Ole Hickory smoker for a taste of Southern goodness that doesn’t necessarily conform to any one region. The Carolina-style pulled-pork sandwich is mounded with juicy hunks of pork, spicy coleslaw and mustard-based sauce, while the burnt-ends sandwich is served unadorned, letting the smoky, black-edged brisket speak for itself. You can reach for one of three barbecue sauces or add sliced purple onions, pickles and jalapeños from the condiment bar to doctor up your picks — though these meats don’t need much of a supporting cast. For a real Southern treat, grab a serving of the complimentary boiled peanuts. Head to the foothills for this spot that slings barbecue Thursday through Sunday only, from 11 a.m. until it sells out. Your jaunt will be rewarded with specialties like Switchback’s Montreal-style brisket, which is cured with spices before being smoked. Other surprises await on the menu, too, like rich duck breast, housemade bacon, chicken legs and smoked salmon. Buy them by the pound, butcher shop-style, or try one of the generously stacked sandwiches. You won’t regret the drive.