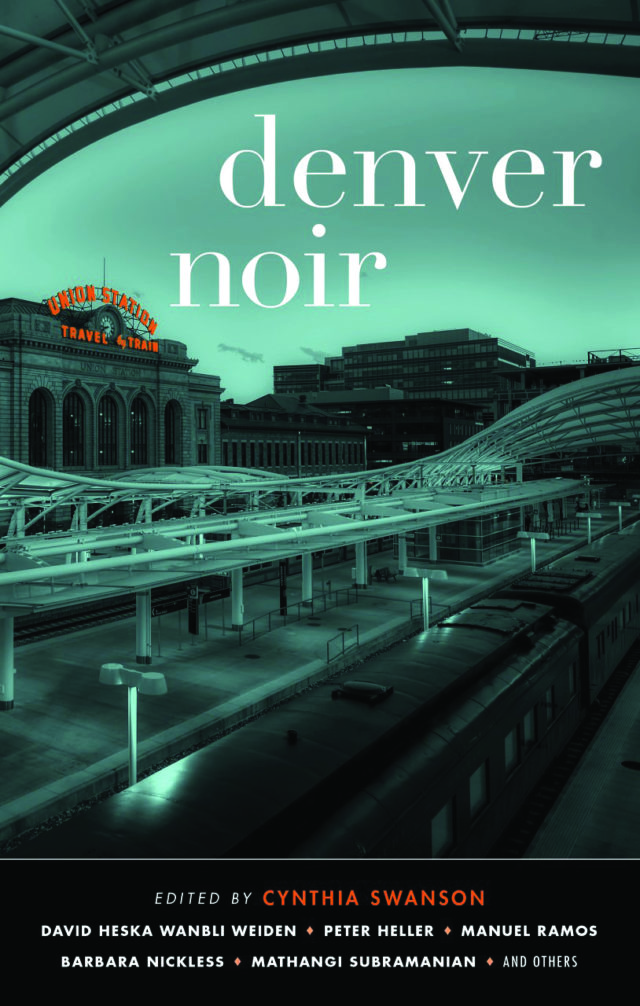 The postcard version of Denver might look like a brilliant orange and blue sunset gleaming over the Rockies, beautiful young people in parks walking their dogs, everybody a mile high.

Look a little deeper, or just take a drive down Colfax Avenue, and a different city appears.

The second version is the one that shows up in Denver Noir, an anthology out this summer by Akashic Books. Akashic has been publishing this series since 2004, with more than 100 city noir titles so far.

In this collection of stories, 14 writers with a connection to the city explore the underside of different areas in the greater Denver area, from Aurora to Lakewood and many parts in between.

The collection was edited by Denver writer and editor Cynthia Swanson. She says Denver makes for a good city as a setting for noir writing because of that juxtaposition between light and dark.

“We’re living in this beautiful location with 300 days of sunshine a year, and yet there is a darkness to this city,” she says.

“There’s a darkness to every city, but there’s a particular darkness and grittiness to Denver that a lot of people don’t see.”

Peter Heller, who has a story in the collection about a murderous paddleboarder on Sloan’s Lake, agreed with that assessment. He pointed out that although Denver can be photogenic, it’s not always what it seems.

“In places that do appear like postcards there’s always a dark underbelly,” he says.

To build on that, Erika Wurth, another Denver-based writer, says that the marginalized populations that are in conflict with much of the change happening in the city also fit with the tradition of noir writing.

“There has always been a large Latinx and/or Native American population that just doesn’t get talked about much under the veneer of the hiking, biking, influx from California,” she says.

“What makes it so perfect for noir today is the dynamic has increased tenfold,” Wurth adds. “Houses have become so intensely expensive, and [the] city has become tremendously desirable, and so the class stratification has grown huge.”

The book is broken into three sections: “The Longest, Wickedest Street,” “5,280’” and “Things to To Do in Denver When You’re Young.”

There’s murder in Capitol Hill, death and jazz at Five Points and even a comic—think a chapter in a graphic novel—about a shooting in Baker.

The stories are consistently dark and violent—what you would expect from a noir book. Where it goes further is in the characters, cultures and milieus it explores.

It’s not just a book about hard-boiled, white male detectives. A wide swath of the people of Denver are represented. Protagonists include Native American lawyers, queer women and Latinx families.

When Akashic approached Swanson to edit the anthology, the publishing company asked her to include a mix of established writers and others who are early in their career. They also asked for a balance of male and female writers, as well as mystery and literary styles.

“They also wanted people from different backgrounds,” she says. “I did a lot of digging around to find who might fit that criteria.”

Swanson’s story is about Cheesman Park, which was once a cemetery, and a young woman, disguised as a boy, who helps to excavate the bodies when the city decides a park would be more attractive.

Cheesman was the “pauper cemetery,” Swanson says. “So there was really nobody that wanted to exhume those bodies or claim those bodies, because most of those people didn’t have family, or anybody that really cared.”

She decided the best person to tell the story was from the perspective of one of the young gravediggers, a fictional character. It doesn’t get much darker, more noir, than a story about digging up skeletons.

The detail of human remains being removed and placed into child-size caskets was taken from real life.

As far as themes that emerged from the collection, Swanson says she wasn’t surprised that a handful of the stories were set on or around Colfax Avenue, where prostitution, drug dealing and violence were once commonplace (and not unheard of now).

The section about things to do in Denver when you’re young came out of a feeling that the frontier nature of the city has always been a beacon for youth.

“Denver is, in a lot of ways, a city of young people,” Swanson says. “That theme came into play throughout a lot of the book.”

When I was asked by Boulder Weekly to recommend five favorite books, I couldn’t resist sharing titles by these amazing Denver Noir authors. In addition to these recommendations, make sure to check out novels by Denver Noir authors Mario Acevedo, Amy Drayer, Peter Heller, Barbara Nickless, and Erika T. Wurth, as well as stories and essays by Francelia Belton, D.L. Cordero, and Twanna LaTrice Hill.

Winter Counts by David Heska Wanbli Weiden. Set on the Rosebud reservation in South Dakota (with scenes in Denver), this is the story of Virgil Wounded Horse, enforcer of vigilante justice, who must come to his own aid when his young nephew is hospitalized after a heroin overdose, and Virgil sets out to find those responsible for drug trade on the reservation.

A People’s History of Heaven by Mathangi Subramanian. A beautiful story that explores friendship, mothers and daughters, and coming-of-age, featuring five girls growing up in a slum in Bangalore, India.

Angels In the Wind by Manuel Ramos.Nominated for the 2022 Shamus Award, this compelling P.I. story also has a personal, heartfelt touch, as Denver-based investigator Gus Corral searches the Eastern Colorado Plains for his cousin’s missing 17-year-old son.

What’d I Miss? Daze of Our Lives by R. Alan Brooks and Cori Redford. A collection of comics from the weekly Colorado Sun feature, recognized by The Society of Professional Journalists as one of the top editorial comic strips in the Rocky Mountain region.

The Fireballer by Mark Stevens. This one is a bit of a cheat, since I haven’t read it yet (releases January 2023). But being a huge fan of Mark’s writing, and with an endorsement from William Kent Krueger that not just recommends but insists that this baseball story is one to read, I can’t wait to get my hands on a copy.