The history of Denver’s older enclaves constitutes a deep dive. Curtis Park is a small enough area in terms of city block, but it’s a location that’s seen so much Denver history over the last 150 years that it would take significant time to unravel its stories, even if you went street by street.

But that is exactly what Gerald Horner wants to do. He’s working with Historic Denver to offer a walking tour of Curtis Park, this year focusing on Curtis and Champa streets, but including anecdotal history from the neighborhood as a whole. The five-hour tour is offered on both September 24 and 25, starting at 10 a.m.

Horner works in real estate now, but is the Kirkland Museum’s former deputy director. He’s also a fervent neighborhood booster in Curtis Park, where he now resides. He serves on the Board of the RiNo Art District, and serves on several neighborhood volunteer committees. “I’ve done a number of walking and biking tours with John Hayden [Curtis Park realtor and fellow neighborhood activist]. We just do it for fun, as a community-building thing and to get to know our neighbors.”

The tour starts at what’s now MobCraft Beer, but it used to be the Golden Bell Press, the second-oldest printing company in Denver. Golden Bell Press opened back in 1934, just after the repeal of Prohibition, primarily publishing liquor magazines. It expanded its business over the years, and finally closed its doors in February 2016.

From there, the tour will proceed to include about a dozen homes and historic sites, where you can admire celebrated interiors as well as the history behind them. Among the stops are important fixtures such as the Temple Emanuel on Curtis Street, the first major Jewish synagogue in Denver when it was built back in 1882. Much of it was destroyed in an 1897 fire, after which it was rebuilt and came to serve other functions.

“It sat pretty much abandoned for many many years,” Horner says. “Eventually, the owners sold to a gentleman named Adam Gordon who converted it into studios and art space. He’ll have the building open, and some of the artists there will be on hand too. It’s a great opportunity for locals to see inside.”

The history of the African-American and Latino presence in Curtis Park is well-known, but may are unaware of the Jewish roots of the neighborhood. The strong history of Japanese influence on the neighborhood during the post-World War II era has also been lost to time. The Home Tour will address those stories, too,  before ending with at a temporary show at the Savoy, another historic building on the corner of 27th and Arapahoe streets. Built in 1899, the ground floor hosted retail such as a drug store, a bakery, an auto shop, several groceries, and even manufacturing for both candy extracts and evergreen wreaths. Upstairs, which from the Savoy’s beginning has been a meeting space and venue, the tour will host a lecture titled Stories of Solidarity: The Japanese Experience in Five Points, as well as a photo and narrative presentation by Courtney Ozaki. Ozaki is a Denver native with generational roots in Curtis Park, and the founder of the Japanese Arts Network.

Ozaki’s grandparents both witnessed Curtis Park during the post-war era; her grandmother was born in a house near the park itself, and her grandfather lived at 27th and Larimer streets, right across from Larimer Lounge. Her father grew up there, and one of his favorite stories, according to Ozaki, is about tortillas.

“My dad would play in the alley around the corner from where he lived,” Ozaki relates, “and this lady was making tortillas out there. She offered him one, and it was the best thing he’d ever eaten. It led to a lifetime love of Mexican food.” The elder Ozaki still talks about a Mexican restaurant that was on the same block — the MG Café, which he still claims had the best burrito and green chile in town. (Our second annual Best of Denver concurred in 1985, awarding the now-closed restaurant “Best Salsa.”)

Many Japanese moved to Curtis Park after being released from the World War II incarceration camp, Camp Amache, in Granada. “[Denver] seemed like a more welcoming place,” Ozaki says, “because of the governor, Ralph Carr, and because there was a population already here. And then everyone ended up in Five Points and Curtis Park because of redlining.” 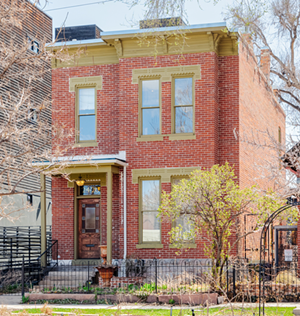 Fusing cultures is at the heart of not only Ozaki’s family story, but of Curtis Park’s. A home on the tour at 2426 Champa Street, a slim Italianate red-brick home, belonged to a Japanese family. But it was ultimately abandoned like many homes in the area after the Fair Housing Act of 1968, which provoked yet another exodus from the neighborhood. After a fire gutted the home during those difficult times, it was eventually purchased for $4,000 and restored, with the new owners renovating the collapsed interior into a bright atrium that floods light into the center of the house.

Such restoration serves as a metaphor for the neighborhood itself: creating home, community, family and beauty, despite painful realities. Resilience is on display throughout the entire Curtis Park Home Tour.

“I’ve come to have such an appreciation for how rare it is to have a neighborhood like this that’s so close to downtown and is mostly intact,” says Horner. “To tell these stories — especially considering our diversity — is both a privilege and a pleasure. And in the end, so important.”