Why Thousands Moved Out of Denver This Summer – Westword

A new study finds that thousands of Denver residents moved elsewhere in July and August, landing it in the top ten on a list of U.S. metro areas with the largest population outflow. It’s all part of what researchers see as a national trend in which a growing number of people are abandoning expensive areas for less spendy places to live.

The September 20 report from real estate website Redfin adds to the increasing body of evidence that people of more modest means are being priced out of the Mile High City, even as more affluent folks move in.

The analysis is based on a sample of approximately two million Redfin users who searched for homes in more than 100 metro areas during July and August, excluding searches that were “unlikely to precede an actual relocation or home purchase,” according to its methodology. To be included in the dataset, the individual had to view listings for at least ten homes in a certain city, with those views accounting for 80 percent or more of the user’s searches.

The report’s introduction notes that “high mortgage rates, persistent inflation and economic woes are making expensive parts of the country less attractive and relatively affordable places more popular.” But its headline, “A Record Share of Homebuyers Relocate, Driven By Moves Away From Expensive Coastal Area,” underscores the fact that Denver is among the comparatively few inland communities to experience the phenomenon. The five cities that lead Redfin’s roster — San Francisco, Los Angeles, New York, Washington, D.C. and Boston — are all on the coasts, as is Seattle, which wound up in eighth place.

Denver, for its part, finished tenth, with an estimated net outflow of 3,739 people in July and August — a number that’s nearly 1,000 persons lower than Redfin’s estimate for the same period in 2021. The favored destination for those splitting was Chicago, which settled at sixth on the rundown.

At first blush, these findings would seem to contradict an August study showing that thousands of rich people have been moving to Colorado. But a separate examination revealed that mountain resort communities were drawing more wealthy transplants than the Denver area — and an analysis from United Van Lines identifies income as one of the most significant reasons related to whether people come or go from the state.

The following graphic lays out those details: 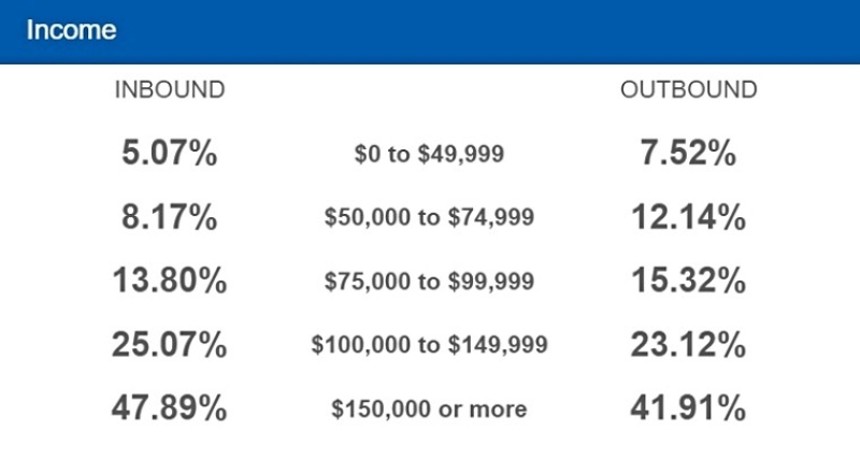 These numbers aren’t specific to Denver, but they’re in line with growth predictions for the city made by Colorado state demographer Elizabeth Garner.

“Denver’s an interesting case,” Garner told Westword in March. “It’s the center of the metro area. Most people from other places know of Denver, even if they don’t necessarily know about Adams County or Arapahoe County. In terms of attracting people from out of state or out of the country, Denver is the primary location, and it’s always attracted young adults. That’s been Denver’s economic engine.”

The overall slowdown in births in Colorado, from which Denver hasn’t been exempt, represents a complicating factor. Garner noted that the top year for births in the state this century was 2007, “so right now, our peak person is fourteen or fifteen years old. As that peak person ages for the next seven years or so, I think Denver’s going to be fine. But after that is where Denver probably needs to be planning for what’s next — when this ability to attract young adults starts slowing down.”

The early signs of such an occurrence are already popping up. Click to read the Redfin study.